Our shows are created by the cast from original scripts by our very own warped genius Catriona Norrish. Kate not only writes all our scripts but hams it up splendidly on stage too. 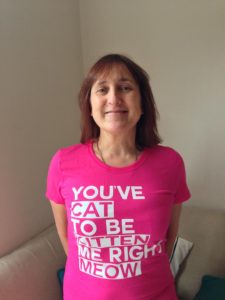 All our shows are musicals (using the term loosely) with songs lurching from complete originals to more familiar tunes – whatever seems most ludicrous at the time. Words and new tunes are written by Dungareen Jean – but realised (orchestration, production) by Deb Fisher (see below). Dungareen Jean was asked to direct “The Lezzwardians” (yes, the one we had all the complaints about). She is unlikely to be given the opportunity again. 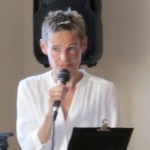 Sets and props have traditionally been begged, borrowed or stolen and assembled by our resident rag and bone duo, Blondie Gibbs and Jane Walker. At one point their home appeared to contain the entire contents of a stately manor.  Since our last show they have gladly handed-over set design and construction to the super-talented Judith Jackson. Karate expert Blondie also designs the zany posters and programmes for all our shows, whilst French impersonator Jane is a dab hand with sticky-back plastic and old washing-up liquid bottles. 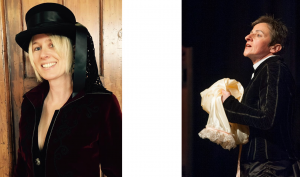 Sensational seamstress, Sophie Kay, literally has us all in stitches by preparing costumes for our shows. This material girl is a bit of a Madonna herself, singing solos in all the shows and wowing audiences with her Hanky Panky dance routines. 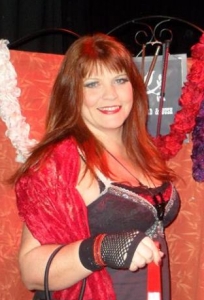 Promotion and Publicity are arranged by our sultana of spin, Jen Grant of Diva Destinations. Jen has a budding career as an international Drag King and sometimes can be seen gyrating her hips as Kenny Rogering, Pelvis Lesley or George Faithless to near-hysterical audiences of middle-aged women. 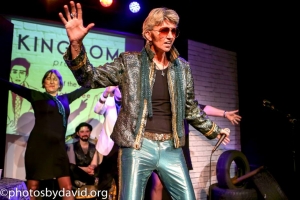 Cathy Beaumont (as seen on Grimebusters) looks after Lezzwood Admin and makes a very serviceable cream tea. Cathy is the very epitome of amateur dramatics. Narrowly missing out on the lead role for Andrew Lloyd-Webber’s show “I Can’t Believe It’s Not Essex” Cathy has brought her unique acting skills to Lezzwood – the West End’s loss is our gain! 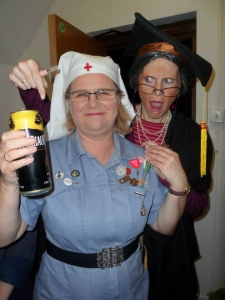 Kezia Bibby  was born in New Zealand and studied at the Dick Van Dyke Academy of Vocal Acrobatics. Here she perfected a cut-glass English accent interspersed with cockernee.  Kez’s appearance in “The Lezzwardians” earned her the title of Pearly Queen of   Patcham. She has stepped up to co-direct our latest two shows with Jo McKinney-Green. 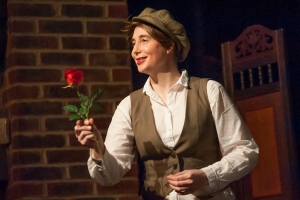 Bobalina Jones had become rather typecast as a teenager after “Lezzington Towers” and “The Lezzwardians” due to her youthful appearance and boundless energy. However, she actually went to school with Judy Dench. After someone finally noticed that she is the only person in the cast who can dance we have now put her in charge of choreography ! 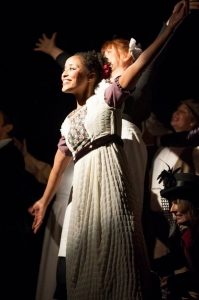 For Lezzby Avenue we were overjoyed to welcome Jo and Sarah McKinney-Green to the troupe. Kiwi Jo brings her events experience and co-directs our shows with Kezia (who luckily speaks the same language). Sarah will, I’m afraid, be unfamiliar to our audience as her previous roles have been with credible and prestigious theatre companies. 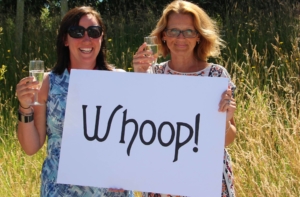 Before Sarah joined us, we often had to call upon the talents of some other people who could actually act. It did always rather show the rest of us up, but we felt it improved the audience experience.

Music and sound effects are cobbled together by our resident (and very gorgeous) nerdy techie, Deb Fisher. Most of her time is spent dealing with the frequent crashes of  the over-worked Auto-Tune when recording songs with the cast, and unravelling self-knitting audio cables. 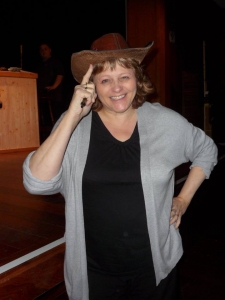 We have now been lucky enough to recruit Stage Managers Lisa Hardie and Tiffany Biddle. Lisa and Tiff mercifully take all the back-stage work off the cast so that they had more time to panic and weep between scenes. 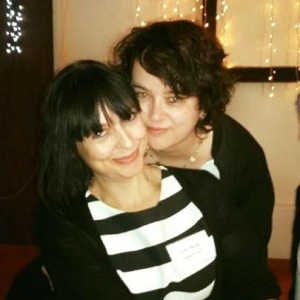 And last, but certainly not least, we thank Max Beaumont (son of Cathy) for his competent and totally unflappable assistance on the technical side; Evan Wilkinson for filming “Murder at The Lezzwood Saloon” and “Lezzington Towers” (his video clips can be seen elsewhere on the site); and Jennie Wilson, Jo Weatherall, Emma Jackson, Jo McKinney and Sarah Green for their help with prompting and front of house activities.

Other honourable mentions go to Martin Oakley from The Barn Theatre, Southwick, who was an absolute star helping with lighting and set for “The Lezzwardians”, Tash Rankin who helped with choreography, and to Vic Bolden-Flett who acted as reserve techie for our L-Fest show.

Cathy Johns appeared as Dolly Partem in the very first lezzwood production of “Murder at The Lezzwood Saloon”. Cathy has now retired from hamming it up on stage and and it’s a great loss to comic theatre.

Claire Wilson also appeared in “Murder at The Lezzwood Saloon”  adding a little bit of glamour to the cast! 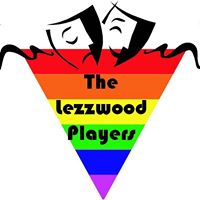